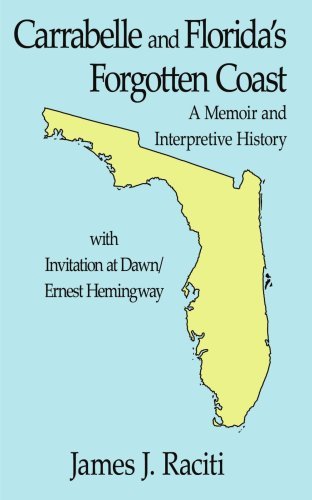 
This book is available from Amazon.


When non-Floridians speak about going to Florida, they generally have the usual vacation spots in mind. The Florida that is described in this book is relatively unknown.
It has been named the”Forgotten Coast” because it enjoys little tourism and has modest means of income. By most accounts, it stretches from St. Marks to Mexico Beach along the present US Highway 98. In the past, the industries of this area included fishing, a large oyster industry (which still flourishes in Apalachicola) and lumber with its paper mills and turpentine camps. During the Second World War, the US Government used this coast for military amphibious landing training. Would it be a question of time before the Forgotten Coast would be remembered and enjoy the prosperity of the rest of the state? Why was this coast ignored by the heavy rush of immigration to Florida starting in the 1920s? Were there no beaches?

The people who make their homes here are not the typical transplanted Northeasterners coming south to enjoy the climate in winter. The locals are mostly Anglo-Saxon whites—more than 90%, at the most recent census. They are hard workers and deeply religious people of various Protestant denominations.

As a memoir, the book focuses on the discoveries the author and his wife made along this Gulf Coast and especially of the small town of Carrabelle, the purchase of an old house which gave the author a once-in-a-lifetime experience. The author’s impressions were favorable. The upside to any investment here was the inexpensive property values; the upside to living here was the wonderful honesty of the locals. There was no downside unless you dislike rural, seaside living. Carrabelle’s main attraction is fishing. A locally designed T-shirt announces: “Carrabelle is a small drinking town with a fishing problem.”