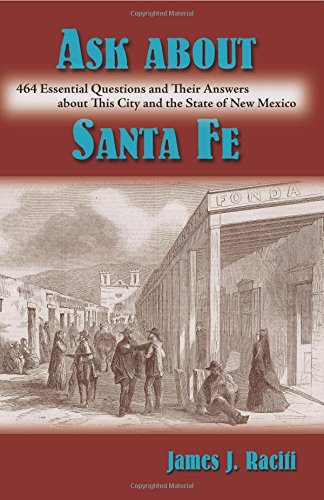 This book is available from Amazon in softcover.

Using a question-and-answer format, this book follows the development of Santa Fe, a city that lived under several flags before New Mexico was finally admitted into the Union in 1912 as the 47th state. It is also about great leaders who knew the price of sacrifice and terrible tyrants who used their power for personal gain only. Covering a broad sweep of history beginning with the area’s first settlers, both Native American and Spaniards, it explores Spain’s forays into the American Southwest from its base in New Spain (colonial Mexico); its quest for gold and other precious metals; and its desire to save native souls by baptism and conversion to Catholicism. Many historical figures are briefly introduced including Don Juan de Oñate; Don Pedro de Peralta; Don Diego de Vargas; Popé, Leader of the Pueblo Revolt; Archbishop Lamy; Kit Carson; Governor Lew Wallace, author of Ben-Hur; the outlaw Billy the Kid and Geronimo. Other topics treated are The Santa Fe Trail and the contribution it made to the region’s growth and prosperity; the brave Buffalo Soldiers; Civil War battles and the men who fought them; the coming of the railroad; and finally statehood. The author says, “My efforts here have been modest. I simply wanted to focus on aspects of the life and culture of people who inhabited these lands and those of the people who came seeking fame and wealth but stayed to leave a lasting mark on customs, language, and religion. Ask about Santa Fe only scratches the surface of a subject that hopefully will entice readers to explore further the origins of the nation’s oldest capitol city within a state of remarkable achievement.”